Sowelu is the runic symbol for sun and is connected to the Norse sun goddess Sunna/Sol.

Sol was the sister of the moon god Mani, and was charged with driving the chariot of the sun as punishment for her father naming her after the sun. Her chariot was pulled by her two horses Arvak (early riser) and Allsvinn (swift) and she rode with the legendary shield Svalinn which was held between her and the Earth below her so the world would not burn from her passing. As they travelled each day they were pursued by the wolf Skoll and legend says that on the rare occassion the wolf got close enought to nip at Sol, it would cause a solar eclipse.

Traditionally Sol was honoured as a goddess of protection, victory and healing, and these qualities have been given to the rune. Additionally, sun festivals were an important part of ancient Scandinavian life and rolling fire wheels down hills and lighting bonfires were often used to welcome the sun and give it power, giving the rune the qualtieis of celebration, recognition, and things being brought into the light.

Thurisaz is the rune of the thorn and represents ideas concerned with protection in the mental, emotional, physical and psychic realms.

This rune also has connections to the god Thor and the ancient Norse giants so also has qualities relating to aggression and challenges, particularly in respect of challenging outmoded ideas and making societal changes.

Perdhro is the rune of secrets, the unseen and matters of chance.

It is thought that early Northern Europeans considered gambling to be a close cousin to divination and the casting of lots was believed to indicate the will of the gods. However it was also believed that the fate revealed was not fixed and that it was down to the gambler or diviner to read their fate and take the action needed to avoid the dangers or improve their own fortunes.

It is also said that the Vikings believed that lot casting revealed inner truths, giving Perdhro its connections with inner transformation and the seeking of esoteric knowledge. 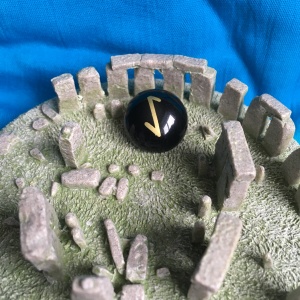 Eihwaz is the runic symbol for yew tree and also relates to the Norse god Ullr, god of winter and winter sports, archery and hunting, who was thought to make his home in ‘Yew Dales’ and likely used yew to make his bows… 🏹

The yew tree represents the cycle of death and rebirth, and was adopted by northern cultures as a symbol of eternal life or longevity and the yew was frequently planted over burial sites to transfer its immortality to dead souls. The yews qualities of renewal can be seen in its use as a Yule log during midwinter solstice, where the wood is burned to persuade the sun to return and in the Norse Rune Poem is called ‘the greenest wood in winter’

This gives Eihwaz the qualities of death and renewal, indicating that while a change may be unwelcome, with patience and flexibility benefits will emerge. 🌳🍂🌱