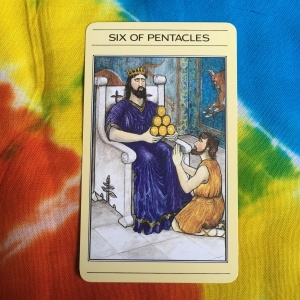 The Six of Pentacles brings the legendary genius Daedalus to his knees in front of King Minos of Crete begging for work after being banished from Athens for killing his own nephew out of jealousy for the boy’s skills. Daedalus is on the road to recovery from self-inflicted loss and disaster but needs the King to take a chance on him in order to progress.

This gives the Six of Pentacles the aspect of an outside benevolence being the key to wealth, work or success, though this benevolence will come due to the reputation earned from past activities.

But benevolence can be given as well as received by you, so while you may benefit from others generosity, don’t forget to be charitable in your dealings and take a chance on others as well. 💰